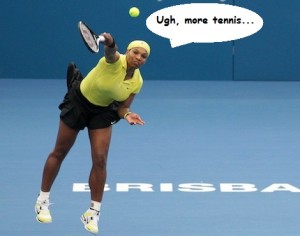 …gee thanks Captain Obvious. It’s really not shocking that Serena Williams is not generally committed to tennis, she’s never hidden the fact that she maintains a pretty easy schedule and only plays the bigger tournaments (mo’ money).

In a presser after she won her opening round in Brisbane against Chanelle Scheepers 6-3, 6-2, Williams said

“I don’t love tennis today but I’m here, I can’t live without it — there’s a difference between not loving something and not being able to live without it. I have never liked sports and could never understand how I became an athlete.”

I’m not shocked that Williams doesn’t like tennis much, I’m sure we’ve all considered her dislike of the sport, I’m just appalled that she actually said it… out loud. It’s one thing to say it post retirement, kind of how Andre Agassi did in his book Open, but it’s a completely different caliber of arrogance to say it while you’re an active player on the tour and in a press conference. Is she giving the F-you to all the other players out there fighting by tooth and nail trying to get a couple of wins to conquer the dreams they have? Sure sounds like it.

There also comes in another factor to her comments, imagine what she could have done if Serena Williams actually cared enough to put a wholehearted effort in her career? I mean, she hasn’t played several tournaments, has not been shy to share her thoughts on other players on tour, and she’s more concerned about going to a fake wedding than to finish a tournament. Even two years after the 2009 US Open “incident” she still doesn’t think she should apologize to the lineswoman, which is really just beyond me.

As I mentioned, Williams clearly has no interest in playing a full schedule, or even close to one it seems, and only wants to play a couple of Majors warm-up events. That’s absolutely fine with the tennis world, we don’t really care how much you do or do not play, just don’t cry about not being #1 in the world, cause you look like a fool. 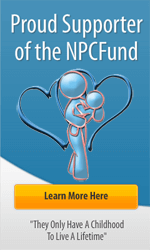